Broadly stated, I am interested in understanding how aquatic food webs are shaped and regulated by basal resources and the environmental factors that control resource contributions at the ecosystem scale. In particular, I am interested in how the contribution and utilization of periphyton (attached benthic algae) and terrestrial carbon structure aquatic food webs across physio-geochemical environmental gradients. In addition, I am eager to know how trophic structure can alter ecosystem functions and metabolic pathways.
​ 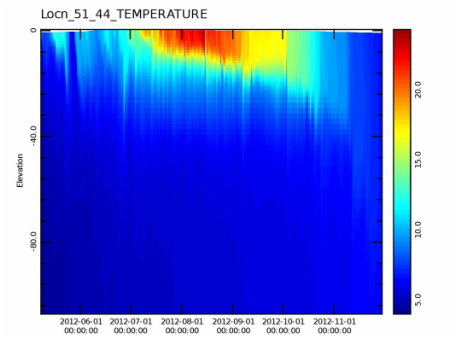 ​I am working with Dr Bonnie Ellis and Dr Jack Stanford using a sophisticated computer model (ELCOM-CAEDYM) and the extensive dataset collected on Flathead Lake by researchers at Flathead Lake Biological Station over the past 35 years in order to tackle some important questions about the lake. For example, how climate change may affect the lake's biogeochemistry and thermal dynamics. We are able to use ELCOM to assess how future climate projections may alter the thermal profile and stratification regimes of Flathead Lake and what this may mean for biogeochemical processes and biota. Another important question we are exploring is how increased nutrient loading and changes in land use within the watershed may affect primary production and water clarity. We are also interested in using the food web components of the model to investigate how changes in the lake's fish community or the introduction of non-native species may reverberate throughout the food web. With invasive mussels and aquatic plants approaching, understanding the potential impacts of these threats in a realistic manner is paramount for the protection of Flathead Lake.

Benthic ecology of the lakes, moats and streams of McMurdo Dry Valley, Antarctica 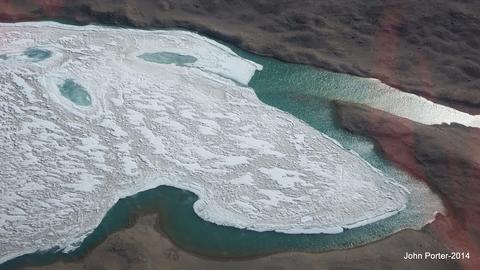 I have recently joined the McMurdo LTER program as a funded collaborator. The McMurdo Dry Valley is the coldest desert region on the planet. I will be studying the benthic ecology of the perineally ice covered lakes, increasingly prominent moats that form around these lakes in the austral summer, and the streams that feed the moats with glacial melt water. Seemingly barren, the Dry Valleys are profoundly complex microbial dominated ecosystems. Stay tuned for more on this incredible opportunity.

Contributions of periphyton to whole-lake primary production and littoral ecology 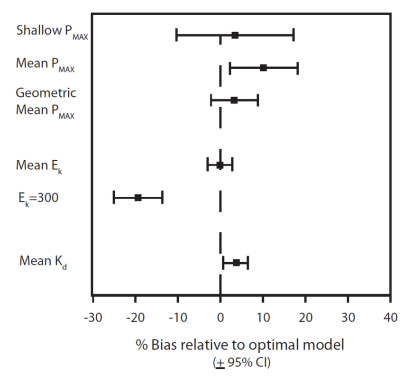 orking with Dr. Yvonne Vadeboncoeur in the Env. Science Ph.D. Program at Wright State University and collaborating with Dr. Jake Vander Zanden (UW-Madison), my dissertation research was focused on primary production (PPR) of benthic algae, also known as periphyton. Lakes are comprised of two distinct yet overlapping and connected habitats: the open water pelagic zone and the near shore littoral zone. The vast majority of aquatic research done in lakes has focused on the pelagic system. In order to help develop a more complete picture of primary production in lakes, for my dissertation, I conducted a four-year monitoring program, based out of Trout Lake Research Station, focused on benthic PPR in northern temperate clear water lakes in northern Wisconsin. From this data set, my colleagues and I determined that spatial and temporal variability in photosynthetic-irradiance relationship parameters (Pmax, Ik, α) and physio-morphometry (light attenuation, basin shape, lake size) can significantly affect calculations of daily whole-lake benthic PPR and that a thorough sampling effort is needed to accurately estimate littoral contributions to whole-lake PPR. I also investigated the role of microbes within periphyton using advanced isotopic techniques. Compound specific stable isotopes of Fatty Acids allowed me to determine how carbon fixed by benthic algae and terrestrial or pelagic derived carbon use by microbes was affected by littoral structural characteristics. 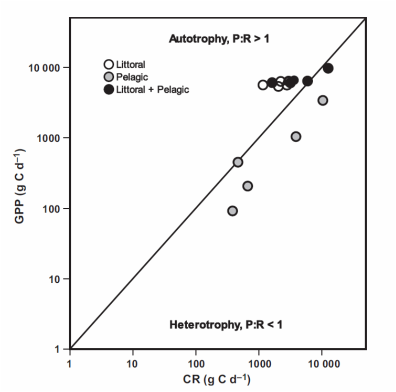 ​​Recent collaboration with my Finnish colleagues and PhD student, Jussi Vesterinen, have shown that littoral primary production can be extensive even in highly humic lakes. So much so that on a whole-lake basis, lakes that were commonly believed to be dominated by heterotrophic metabolism are actually net autotrophic when littoral primary production is accounted for.  Further isotopic labeling studies we conducted have shown that macroinvertebrates are extremely reliant on benthic autochthony. More work on microbial biofilms in humic lakes is currently under way! 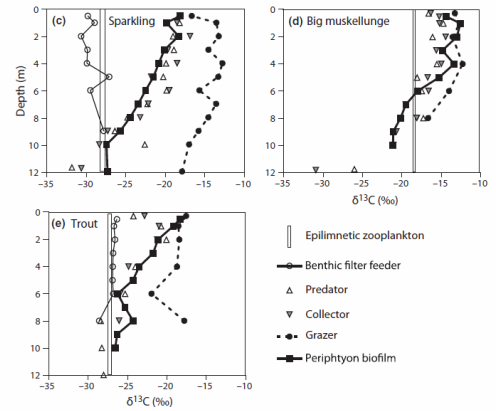 The importance of littoral zone carbon dynamics and the role of benthic algae as a resource in aquatic food webs is another focus of my research. Stable isotopes analysis is a powerful tool to investigate what resources within a lake support aquatic consumers. Resource mixing models are used to calculate basal resource utilization but rely heavily on a detailed isotopic picture of basal resources and estimations of trophic fractionation of particular isotopes. Coupled with the benthic PPR work described above, we demonstrated that changes in PPR rates with lake depth (and potentially within periphyton mats themselves) affect the carbon isotopic signature of periphyton, and this variation must be accounted for in models that calculate consumer reliance on benthic algae.
Research Interests Keywords:
Littoral Ecology, Periphyton,  Zoobenthos, Microbial Ecology, Clear-water Lakes, Humic Lakes, Stable Isotope Analysis, Food webs, Trophic Interactions, Ecosystem Ecology, Biogenic Methane, Methanotrophy, Microbial Interactions, Modeling, Community Structure, Trophic Cascades, Autotrophic Structure